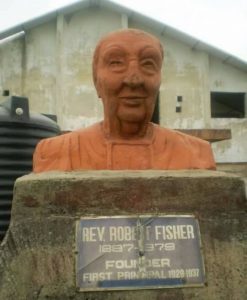 Born in 1887, Rev Robert Fisher studied at Marlborough College, Pembroke College, Cambridge and Wells Theological College. In 1909 he took his Holy Orders and began his tenure as Curator of St Mary the Virgin Church Tottenham.
He joined the African Missionary where he combined priestly functions with educational duties. His first appointment was Principal of Grammar School and Government Training College in Accra. He worked in the educational department in Gold Coast (Ghana) and taught at Achimota College. He was sent to Nigeria and was commissioned to establish and direct Umuahia Teacher Training College.

Robert Fisher arrived in Umuahia in 1927 and acquired land of 10 square miles (26 km2). On January 29, 1929 he opened the gates of the school to 25 students drawn from all parts of Nigeria and West Africa, but with catchment in Eastern Nigeria, and the Southern Cameroons. The Government College Umuahia began in 1929 as a teacher training institute and in 1930, converted to a secondary school. Fisher ran this school until 1939 when, at the start of the Second World War, he left for England on retirement and was replaced by W. N. Tolfree.

At the end of the civil war in Nigeria, Rev Fisher sold his earthly possessions, including his home in England, moved into a nursing home with his wife, and willed the money to the Government College Umuahia.

ref: Achebe and Friends at Umuahia: The Making of a Literary Elite By Terri Ochiagha