A TRIBUTE TO A LIVING LEGEND: DR CHUKA NWOKOLO – CBE, CLASS OF 1966 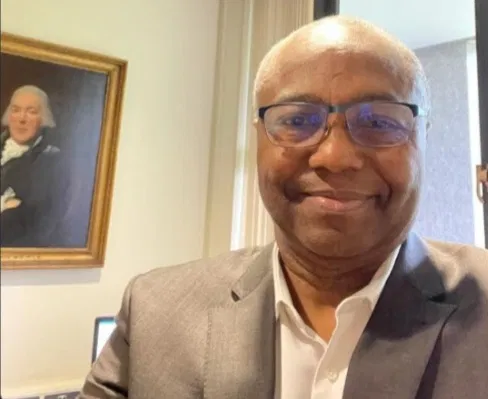 The Queen of England’s conferment of the CBE honours at her 2021 birthday Honours list did not come as a surprise to most of those who have met and interacted with Dr Chuka Nwokolo, either in Government College Umuahia (GCU), the University of Nigeria, Nsukka (UNN) or in Jos Plateau State, where he served his NYSC and later established a medical partnership with the late Dr Chudi Nwike, one time Deputy Governor of Anambra State, who met his untimely death at the hands of kidnappers a few years ago in Nigeria.

This long overdue and well deserved honour to a great Medical practitioner, who first received his primary, secondary and tertiary education in Nigeria is not only worth celebrating, but tells us clearly, that truly and in confirmation of Chinua Achebe’s book: “There Was A Country”, where did we as a country take the wrong bend?

Chuka is married to Nwabueze Nwokolo, (one of the daughters of Dr Jaja Anucha Wachuku- one time Speaker of Nigeria’s Parliament and one time Foreign Minister in the First Nigerian Republic. Dr Jaja Wachuku himself and a number of his sons and relatives attended GCU.

In a College, where discipline was like in the military of yore, seniority was very clear and respected. Most seniors were feared, revered and almost idolized. We were more scared of our Seniors and prefects, than the teachers.

But with Chuka, he was calm, easy going and protective of the junior boys, although some of us got cheeky once in awhile and would run to him for protection. I have always considered Chuka Nwokolo, as a brother, friend and an outstanding scholarly Umuahian (as we refer to ourselves in GCU)

Most brilliant Government College boys in the very early ‘70s, looked up to Chuka Nwokolo as a role model. By his Form 3, he had finished solving all the problems in the Physics book by Nelkon & Parker, and Chemistry book by Holldaness & Lambert, used for O’Level WASC.

And in the then unique tradition of Government College Umuahia, the only college, then in Africa, which encouraged the best 30-40 boys in a final year general examinations, to move from Form 2 to Form 3A, with an accelerated syllabus in preparation for School Certificate Exams the following year, when they were promoted to class Lower 5. (i e sitting for School Cert in 4 years), instead of the normal 5 years.

Dr Chuka Nwokolo, expectedly passed WASC, with distinctions in all subjects in Grade 1.

He then proceeded to the University of Nigeria Nsukka, having again, done exceedingly well in the very competitive National entrance exams into the UNN’s College of Medicine.

He graduated from medical school expectedly in flying colors. He then did his Housemanship at LUTH Idiaraba, before proceeding to Jos for the National Youth Service Corps (NYSC). All of these in this same Nigeria.

Dr Chuka Nwokolo, is not only a brilliant scholar and medical practitioner/ Consultant, he is a great family man, a dependable and caring friend. Disciplined and integrity personified.

Medicine is as much his life, as his family is also to him. He has medicine in his DNA, his late father was a Professor of medicine and Dean of Faculty of Medicine in UNN.

At the height of the Covid-19 pandemic last year, he was in the frontline, attending to Covid patients, although, he was meant to have retired, but this committed humanitarian doctor wouldn’t give up, until he caught Covid. But that never deterred him. When I telephoned to check up on him, he was back on frontline duties at the hospital. A committed and indefatigable doctor of rare qualities.

Tried as much as I did to persuade him to take a break, he told me simply, that he could not shirk his responsibilities and just sit back at home knowing that his patients were dying from Covid.

The family man Chuka, has for almost 40 years, had the unwavering support of Nwabueze- the wife of his youth. They must have started dating as teenagers, I suspect during those Debating Society encounters between Government College Umuahia and Queen School Enugu. Those Queen School damsels were beauty and brains. And they just loved the Umuahian Boys. The feeling was mutual. But some of us preferred and ended up with Queens College Lagos. Same Queens all the same.

For all those years of consistent diligence, hard work, focus, fear of God and above ALL, God’s abiding favor, Chuka Nwokolo was just last week, knighted by the Queen of England, with CBE in the Queen’s 2021 birthday honours. An honour well deserved and appreciated.

So, I say to the Nwokolo family of Irefi Oraifite in Anambra State and the Wachuku family of Abia State of Nigeria- A BIG CONGRATULATIONS to you Chuka Nwokolo, my good Sir.

You have made, Nigeria, nay, the black race proud. You have told the world our story.

This post appeared on New Diplomat on June 13, 2021 https://newdiplomatng.com/tribute-living-legend-chuka/